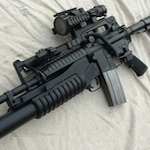 For almost 10 years, Colt Defense of Hartford, CT, has been the exclusive provider of Military issued small arm assault rifles, selling over 700,000 of their Colt M4 Carbine to the U.S. Defense Department.  Such an endorsement has also generated enormous revenue from overseas militaries as well.  But now the Defense Department is opening up the competition and searching for a new state-of-the-art weapon to provide the troops.  With such a tremendously lucrative contract being evaluated, the weapon manufactures are leaning heavily on Washington insiders to try to position their products as the most worthy of the contract.  Colt has turned to RMax Technologies, run by former deputy assistant Navy secretary Roger Smith, to assist in navigating the procurement process.   Competitor Remington Arms based in Madison, N.C. has spent over $500,000 in lobbying services over the last 2 years in anticipation of the contract being opened back up.  Amongst others competing for the contract are FNMI who currently provides a combat rifle to the U.S. Special Operations and utilizes the American Business Development Group as their voice in DC;  Smith & Wesson who retains Greenberg Traurig as their Washington representation; and Heckler & Koch USA who also sells an assault rifle to U.S. Special Ops.

Read the Entire Article from The Associated Press