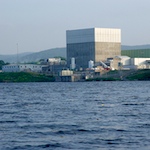 The small Town of Vernon, VT has a population of under 3,000 but is home to one very large resident.  Entergy Corporation (NYSE: ETR), based in New Orleans, LA, owns and operates the Yankee Nuclear Power Plant which it purchased in 2002 for $180 million.  The plant was the third to be built in the U.S.  Amid rumors of a possible sale of the power plant, the town of Vernon is consulting with Lobbying firm Smith & Miller, LLP of Northfield, VT who represents the town in the State Capital of Montpelier.  In February 2010, the Vermont Senate voted against a license extension which is due to expire in March 2012 due to safety concerns stemming from a history of radioactive leaks.  The site was closed again yesterday (Nov. 8, 2010) due to another leak.  Earlier this month, Vermont voters elected Peter Shumlin (D) as the state’s new Governor.  The Governor-elect has stated that he is in favor of rejecting a 20-year extension of the plant’s operating license.

Read More from the Brattleboro Reformer