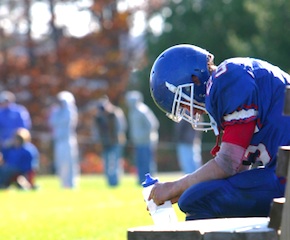 As a star linebacker on his middle school football team, Zackery Lystedt made a lot of big plays and took some heavy hits. During a game in 2006, the Washington State youth was sidelined with a concussion. He should have been kept off the field. Instead Zackery was sent back into the game, only to go down in a goal line tackle that caused a second concussion. This one was catastrophic, inflicting massive brain trauma. Only 13 years old at the time, Zackery’s struggle back to health soon made him a poster boy for the need for new safety standards in youth athletics.

Motivated by Zackery’s story, a partnership of community groups and medical associations successfully lobbied Washington State for passage of the Zackery Lystedt Law in 2009. These advocates demanded more education for school coaches about the signs of brain injury, and greater medical oversight in the event that a concussion should occur. Soon other states adopted similar “concussion laws” to protect young athletes from brain injuries. Propelled by the lobbying efforts of the National Football League, 33 states and the District of Columbia have put on the books some version of the Lystedt Law in an attempt to prevent some of the 135,000 sport-inflicted head traumas suffered every year by American children.

While the NFL has been a strenuous partner in prompting Lystedt Law, this advocacy is not without its skeptics. The case has been made that the League’s passion on this issue is at odds with its own spotty record on head injuries. Nearly a dozen NFL players residing in Louisiana filed suit this past month against the League, charging it with negligence in dealing with the danger of concussions. This move occurs in the shadow of a wrongful death lawsuit filed by the family of former Chicago Bears Safety Dave Duerson. The suit alleges that Duerson’s suicide resulted from crippling mental impairment he suffered due to blows on the field. To critics, the League’s lobbying efforts for the Lystedt Law can be viewed as a P.R. bait-and-switch, allowing the League to shield its own culpability for head injuries behind its advocacy for young players, athletes for whom the League is not responsible.

Whatever the NFL’s motivation for leading the charge on the Lystedt Law, there is no disputing the weight of its influence. The high shine prestige of the League, plus the passionate appeal of local health care interests have made concussion laws a popular, bi-partisan issue.

Yet while the states have moved with rapidity towards implementation, efforts at the Federal level to enshrine base-line national standards, most notably H.R. 469, “The Protecting Student Athletes from Concussions Act,” have so far been stymied. While a compromise between advocates and skeptics will almost certainly be struck in Washington — few legislators want to be branded as unsympathetic to the needs of injured children — the issue has clearly run afoul of the national mood. Critics of a Federal initiative resist the idea of big government meddling in small town athletics, strapping middle and high-school programs with expensive new rules, including the costs of medical oversight, during an era of cinched budgets.

In the end, the whole debate over Zachery Lystedt’s legacy presents an interesting case study for lobbyists. Concussion laws have strong bi-partisan support and few organized naysayers. Lobbying efforts by a consortium of interests have had remarkable success at the state level. But as the NFL has found, this advocacy has not translated into a big score in Washington. Once again there are some issues, no matter how broad and deep their popular support, among Democrats and Republicans that simply have to be resolved at home. And nothing is closer to home than high school football. So while people seem willing to accept common sense answers to the problem of concussions in youth sports, lobbyists or advocacy groups won’t get far with them if the solution they push gives Uncle Sam a seat on the fifty-yard line, casting his shadow on the Friday night lights of local pride.