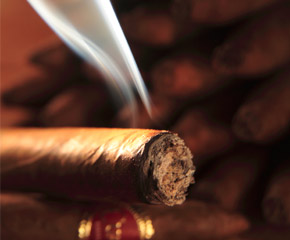 Up in smoke.  That’s what lobbyists for the premium cigar trade are worried will happen to their profits if the FDA enacts new health regulations on the tobacco industry.  But it turns out that while it might be a lot less smoky in the smoke filled room these days, politicians still like to put their feet up for a good puff with colleagues and donors, and they are willing to work across the aisle to keep regulators out of the nation’s humidors.

In 2009 the FDA put in place new restraints on tobacco sales.  These restrictions, however, were not extended to premium cigars.  Now high profile health advocates, including the American Medical Association and the American Cancer Society, are urging the FDA to go after all tobacco products.  The effect of this enhanced regulation would require cigars to be branded with the same health warnings as cigarettes, and it would place aggressive limitations on marketing and mail order sales.

Catching a whiff of these changes, John Anderson, a cigar shop proprietor in Washington, partnered with lobbyists from K & L Gates to devise legislation that would carve out an exemption in the FDA rules for the premium cigar trade.   Shopping the bill around Capitol Hill, its sponsors found that the rolled leaf has plenty of fans in Congress.

Even in a period of national neuroticism on health and safety issues, cigars remain a staple item on the hustings.  A recent study by the New York Public Research Group found that politicians in the Empire State have dropped almost 50,000 dollars on cigars since 2008, with most of the cigars used as fundraising swag.  While Republican lawmakers indulged more avidly than did their Democratic counterparts, the New York study found that lefties also like to light up.

This bi-partisanship of the big smoke is evident in Washington–with its myriad of cigar clubs, bars and lounges—and in the efforts of the unusual array of Republicans and Democrats who are sponsoring the Traditional Cigar Manufacturing and Small Business Jobs Preservation Act (HR 1639).  The legislation, modeled on the bill drawn up by Anderson and the lobbyists from K & L Gates, and buttressed by a concurrent legislation in the Senate (S. 1461), would carve out exemptions for premium cigar sales in the event of new FDA regulations.   According to Cigar Rights of America, an industry trade association, the legislation has 219 co-sponsors in the House and 13 in the Senate, which include caucus headliners like Pete Sessions (R-Texas) and Steve Israel (D-NY).

As the naming of the bill makes bullhorn-clear, the crux of the argument here is jobs.   While cigar industry lobbyists like to argue that their products pose less of a health risk than other tobacco products, and are not attractive to minors, the Cigar Act really is pitched at protecting the employment of the 85,000 people who work in cigar stores in the U.S.   In a period of sluggish employment data any appeal to job creating or saving is clearly a winning narrative, and it is likely that, at least in the short run, high end cigars will continue to enjoy their status as a softly regulated luxury item.   That said, not all cigars are created equal.  Down market brands, such as the venerable Swisher Sweets, have been written out of the Cigar Act, and remain vulnerable to any new FDA laws.   Woe to those that buy their smokes at truck stops.