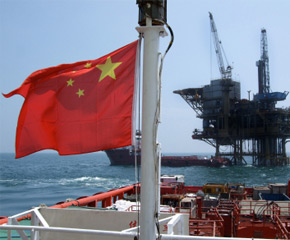 To ease the beyond-complicated purchase of Nexen, CNOOC has contracted with top tier firms Hill & Knowlton and Wexler and Walker Public Policy Associates for P.R. and lobbying.  Hill & Knowlton is also working the Canadian end of the review and acquisition process.

CNOOC’s bid for Nexen is most ambitious foray China has made into the North American oil market.   In purchasing Nexen, CNOOC would not only stake a significant presence on Canadian oil sands, but also position itself, through Nexen’s holdings in the Gulf of Mexico, to develop resources off the American shoreline.

To proponents of the CNOOC deal it is a textbook example of how openness in North American markets continues to make the continent a vibrant investment destination.  Furthermore, advocates of the deal are also selling the message that the Chinese tiger is not going back into the cage.  It would be folly to tie the hands of business in hyper-regulation as China goes on an energy binge, thereby preventing Western economies from scoring on its explosive growth.

These arguments are not bending every will.  The deal is now taking hits in Ottawa and Washington, and in the U.S. this antagonism is robustly bi-partisan.   In heated statements to the press, Sen. James Inhofe (R-OK) has torn apart the Nexen deal, citing CNOONC’s ownership by the Chinese state as sufficient reason, in the interests of national security, to prevent it from doing business in the Gulf.

From across the aisle Sen. Chuck Schumer (D-NY) has been equally disparaging.  In a letter to Treasury Secretary Timothy Geithner Schumer demanded that the government play “hardball” on the CNOOC deal, tying it up until there are guarantees that the Chinese government reciprocates by allowing American businesses greater access to Chinese firms and markets.  The Treasury Department is responsible for reviewing the purchase of American assets by foreign companies.

Since the economic meltdown of four years ago China has pushed out of the third world into western markets, scooping up bargains.  The emergence of China as a driver in western economies risks political uproar, as demonstrated with the CNOOC deal.   But in the aftermath of the Unocal debacle China has come to see the importance of tying business strategies to sophisticated messaging.  Through the retention of well-established and deeply connected lobbying firms like Hill & Knowlton that is clearly lesson learned.   The Nexen deal is not a singular event.  In the coming years China will enlarge its North American business footprint, as political obstacles erode over time, which will create positive opportunities for lobbyists to help China partner its economic clout with western markets and western democratic institutions.