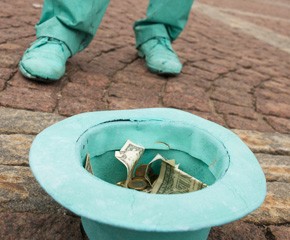 A juggler sits atop his unicycle before a Times Square crowd.  At his feet lies a hat with a few coins in it.  The juggler begins to ride back and forth, and as he does so he throws his balls higher and higher into the air.  The sight of these bright, flying objects draws an ever-swelling crowd of spectators who applaud the juggler’s balancing act, and throw him a few more dimes and dollars.  If the juggler is showy and talented, then by the time he packs up his bowling pins his hat should be laden to overflowing with the crowd’s good will.

Is this some sort of begging or is this the future of capitalism?  Replace the juggler with a tech innovator’s idea, Times Square with a website, and that hat with a virtual “Donate” button, and you have crowdfunding, the street performer of e-commerce.

One of the most dynamic innovations in web economics, the concept of crowdfunding has exploded in popularity on sites like Kickstarter, where fans of just about any idea — commercial, artistic, political — can subsidize with donations their favorite causes or commercial ventures.  But for now all of this enthusiasm is strictly one-dimensional.  Want to go further with your favorite juggler and buy a stake in his future earnings?  Want to turn crowdfunding into “crowd-investing”?  A very strict line guarded by stringent securities law says you can’t do that.

There is a high probability this will change.   An improbable army of advocates, including net roots techies, Occupy Wall Street activists, tea party Republicans, Chambers of Commerce, and President Obama are pushing with irresistible force for the SEC to carve out a specific “crowd-invest” exception in investment rules entrenched since the Great Depression.

Currently the SEC regulates every link in the investor-broker-entrepreneur dynamic. Its rules make the standard IPO a massively complex and expensive mix of disclosures, approvals, and benchmarks.  Historically this mass of regulations has protected investors from predatory investment fraudsters.

But history is something that happened a long time ago for those lobbying in favor of a crowdfund exemption.  They argue that the SEC protocols are cob webbed with pre-internet paranoia and do not account for the dynamism and openness of e-commerce.  Modernize these regulations, they argue, by loosening and streamlining laws that dictate how small businesses go public and who can crowd-invest in them, limit crowd-investments to small dollar amounts to reduce risk and, finally, relax regulatory oversight and replace it with the common sense “wisdom of the crowd” that already governs how people spend their money on-line.  To proponents at advocacy sites like crowdfundinglaw.com, these reforms will unleash a tsunami of web-based microfinancing, pumping millions of investor bucks into start-ups and local businesses while creating over a million new jobs.

Millions of new jobs?  The politicians have been convinced.  This past November the House acted, passing a crowd-investing exemption bill, H.R. 2930.   Introduced by Tea Party Republican Patrick McHenry, the bill passed with deep bi-partisan support 470-17.  Two similarly written bills are currently before the Senate banking committee.

Critics of deregulation argue that you don’t have to go back to the Great Depression to see the risks in junking regulation, or to recognize that crowd mentality is not necessarily the gold standard on wisdom.  The AFL-CIO has lobbied hard against H.R. 2930 as dangerous, a deregulatory give away to Wall Street that will weaken the economy by enabling fraudsters and scammers to float shady “investment opportunities” on the net.  Consumer groups have derided it as “ill-conceived.”  The North American Securities Administrators Association, a professional lobby for securities regulators, has been strongly opposed to multiple sections of the bill that they consider foolhardy, rash and reckless.  And given the staggering rate of small business failure in this country, others have questioned the inflated rhetoric of proponents in terms of the actual payback investors will see on their money.

“Velociprator! Cannibalism!,” a card game of “survival, mutation and stealing body parts,” is now crowdfunding on Kickstarter.   Indeed this fun game of mutating dinosaurs has currently hit 550% of its funding objective through donations, with room to grow.  Crowdfunding has become popular and provides evidence of a mass appeal that crowd-investing could certainly match and exceed.  So if the President signs these SEC reforms into law, only then, when the game is played with money, not cards, will the vision of unfettered crowd-investing be tested by any velociraptors that lurk in the jungle of the internet.