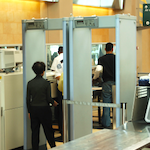 There have been two bills introduced by members of congress that aim to limit or stop the Transportation Security Administration’s (TSA) new pat-down techniques and body scanning equipment which are now placed at 68 airports around the country.  These bills are also supported by the American Civil Liberties Union (ACLU) which has been receiving complaints over privacy and health concerns that the new security measures may pose.  The ACLU is also considering legal action against the methods.  Such measures, and a roar of national attention, has manufacturers of the body-scanning devices, L-3 Communications and Rapsican, actively lobbying to defend their technologies and prevent any legal or legislative restrictions.

Read the Entire Article by Kevin Bogardus of The Hill

In 2010, Rapiscan, Inc has utilized the outside lobbying services of:
• Holland & Knight